The Physician of Gods and Giver of Health- Lord Dhanavantri 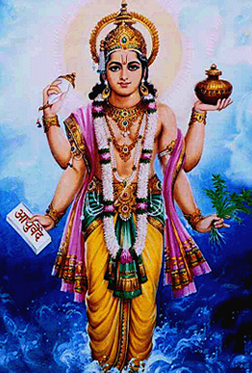 Lord Dhanavantri is believed and revered to cure all ailments and diseases by a mere ‘darsanam’ of him and is worshipped ardently by devotes all across who seek his blessings for a healthy life. In South India Andhra Pradesh is the only state that enjoys the unique distinction of having a exclusive temple dedicated to Lord Dhanavantri. This temple is located in Chinataluru village, Alamuru mandalam, East Godavari district.

The holy Hindu scriptures exhort and reiterate that a ‘darsanam’ of Lord Dhanavantri is the panacea for all human diseases. Lord Dhanavantri is the presiding deity of Chintaluru and the upkeep of and monitoring of the Lord’s temple, the daily oblations to him is undertaken by the reputed and well known Ayurvedic organization, Sri Venkateswra Ayurveda Nilayam.

As per Hindu mythology, Lord Dhanavantri is considered to be the descendant and 12th incarnation of Srimann Narayana. He is believed to have emerged from the milky ocean during the churning by the Devas and Asuras in pursuit of obtaining the Nectar (amritam/ ambrosia), in a tremendous physical form holding the conch ( sankham), the discus ( chakram), aushadam ( medicine) and the pot (kalasam) in each of his 4 hands.

In the holy heavens, promoting ayurveda and giving relief and succor to the diseased devas (gods) accursed by Sage Duravasa, Lord Dhanavantri earned the admiration and respect of the Devas in due course.

Besides, he manifested in a human form in the mortal world in the Second Dwaparayugam phase taking birth as the able son of King Dhanwanrupaluni of Chandravamsa dynasty who ruled the kingdom of Kasi. He was named Dhanavantri and during his reign promulgated the good practices of Ayurveda and in later years attained divinity. Lord Dhanavantri is considered the god of Ayurveda and several Ayurvedic scholars attribute the success of their profession to his grace and beneficence.

Carrying on the traditions of Ayurveda and the mandate, the founder of Sri V A N Ltd., Dr. Dwibhashyam Venkateswarlu garu, is a learned and prolific Ayurvedic scholar. Earning the sobriquet ‘Vaidya Raja’, he is a renowned practitioner and also the chief person responsible for the building and anointment of Lord Dhanavantri’s temple in Chintaluru village, Alamuru mandal of EG district way back in 1942.

Subsequent to him the endeavours were entrusted to his son, Dr. Dwibhashyam Venkata Surya Narayana Murthy who took over the reins of administering the temple, supervising and fulfilling the various needs. Passing on the baton to his successor, essaying the role in present times is the current Managing Director of Sri V A N Ltd., Dr. Dwibhashyam Venkata Sri Rama Murthy holding the responsibilities. He has arranged for the renovation and refurbishing of the temple to its old glory.

This exclusive temple of Lord Dhanavantri located in the State of AP is accessible by rail and road. It is situated 35 kms from Rajahmundry and 15 kms from Ravulapalem. Also the country wide reputed Sri V A N Ltd. is located in close proximity and it is their fervent appeal to all to visit the holy temple to pay obeisance to the deity and get freedom from all ailments.

The Spread of Ayurveda 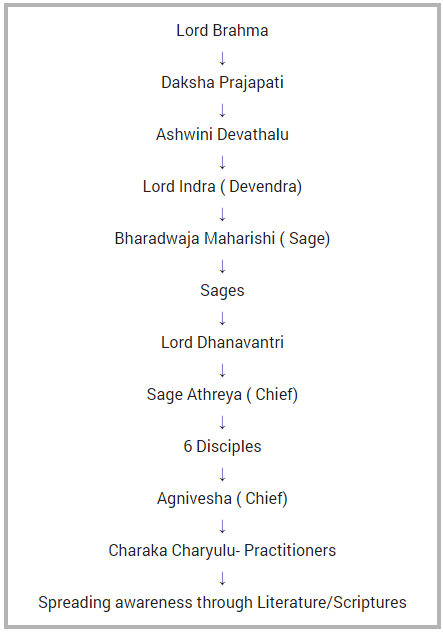 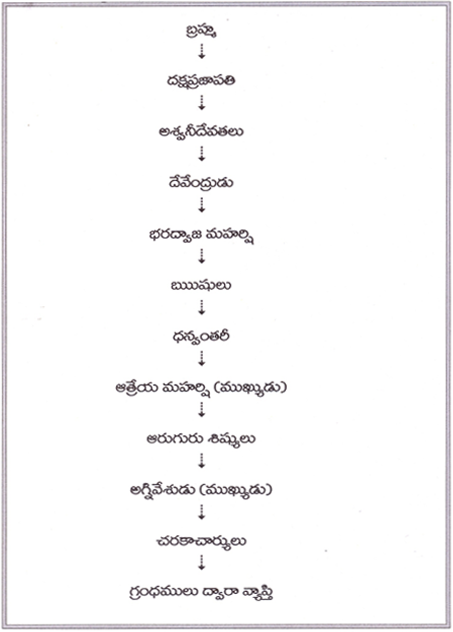 Dhanavantri has descended from Srimann Narayana. He is the first physician for mankind. The mention of Lord Dhanavantri is also found in Sri Bhagavatham and several holy puranas. In several provinces, the local people have built temples in his glory and worship him.One of these temples is built in the land of Telugus (9th December is celebrated as Dhanavantri day).

In the onset of Karthika masam Bahula Trayodasi, the Gods and Demons engage in the churning of the milky ocean in search of the elusive Nectar. It is an event of the magnitude of a bloody war. Thrown up in the samudra manthan or churning is the Kalpavruksha, Kamadhenu and Goddess Lakshmi Devi and eleventh in the order was a handsome young man with big and attractive eyes, thick locks, well built in stature and with a charming smile on his lips. The 3 crore gods of the Hindu Pantheon watched him in awe & admiration. Dressed in peethambaram robes, with attractive ear rings and a divine garland shone on his chest, he was indeed a sight to behold. In one hand was a nectar pot, in other were herbs. He resembled Sriman Narayana….no… no..he was Sriman Narayana himself. The gods Brahma and Shiva named him Dhanavantri.

Dhanavantri means the destroyer of the fears of the mind, the diseases of the body. As per puranas, Dhanavantri is the architect of good health. It is an old custom to observe Dhanavantri Vratham for full fledged health. On the Dhantrayodasi day Goddess Lakshmi is also worshipped along with Dhanavantri. In Karthikamasam every year, Dhanavantri Jayanthi is celebrated. On the beach or hospitals or own home, a kalasham is installed to invoke lord Dhanavantri and respects paid to physicians and the healthy people to seek their blessings. As per traditions the prasadam is a dish prepared by using moong dal

Once upon a time, resultant of a curse by Sage Durvasa, the 3 crore Gods of the Hindu Pantheon were afflicted by diseases. In this situation, Lord Dhanavantri treated the Gods with rare herbs and cured the immortal Gods is the belief. The mention of Dhanavantri varies in each of the Puranas. In Brahmavivartha Purana, he is described as the favourite disciple of Sri Surayanarayana, the Sun god and supposed to have learnt Ayurveda from him. Yet in another context, he, in deference to the orders of Lord Vishnumurthy in the 2nd Dwapara yugam, took birth as the son of the king of Kasi, King Dhanwanrupaluni of Chandravamsa dynasty…..turning Ayurveda into a science, along with Susrutha he administered treatment to many people. In his later years after accomplishment of his mortal mission, he embraced his divinity once again as per the Puranas. He is considered the God of Ayurveda by ayurvedic practitioners. Across the country, there are several temples dedicated to lord Dhanavantri and one such temple has its pride of place in the land of Telugus.

Located in Chinataluru village, Alamuru mandalam, East Godavari district is the Lord Dhanavantri’s temple. Alongside river Gautami, in midst of green fields, in about an area of 2 acres is the abode of Lord Dhanavantri. The worshippers believe that by just setting foot in the temple, all the diseases are cured. The forecourt of the temple is adorned with the Dwajasthambam and the sanctum sanctorum is a huge edifice with the magnificent and divine idol of Lord Dhanavantri installed. The idol is a monolith sculpted from milk rock found in Kasi and sculpted there and then it was transported to this location. The image of the God with his 4 hands is an awe inspiring sight. Holding a nectar pot in one hand, conch in another, the discus ( chakram) in the 3rd and a leech in the 4th hand, the God appears. As per ancient ayurveda, treatment using leeches is a common practice as the organism is capable of sucking diseased blood.

The founder of Sri V A N Ltd., Dr. Dwibhashyam Venkateswarlu garu, is a learned and prolific Ayurvedic scholar. Earning the sobriquet ‘Vaidya Raja’, he is a renowned practitioner and also the chief person responsible for the building and anointment of Lord Dhanavantri’s temple in Chintaluru village, Alamuru mandal of EG district way back in 1942. In order to develop the place he has earmarked 18 acres of land as temple lands in the lord’s glory.

His lineage continues and his successor Dr. Dwibhashyam Venkata Sri Rama Murthy is holding the responsibilities. He is a man with a mission and has taken upon himself the task of beautifying the temple precincts and renovating its old glory.

This exclusive temple is accessible by rail and road. It is situated 35 kms from Rajahmundry and 15 kms from Ravulapalem. Every year on Karthika Bahula Trayodasi day, the Dhanvantari day is celebrated with fervor and gaiety.

Srirangam is a famous seat of Vaishanavites in Tamil Nadu. In the Lord Ranganathaswamy’s temple there is a small sub temple for Lord Dhanavantri. In any temple the Teertham is offered or at the most the Panchamritham as prasadam, but in Lord Dhanavantri’s temple here, an herbal concoction is offered as teertham. This concoction is reputed to cure chronic ailments is a belief fostered. In Kanchi,in Varada Raja Peruma’s temple there is an idol of Lord Dhanavantri worshipped. In Kerala near the Guruvayurappan Temple also is a Dhanavantri temple built and it is practice by all beginner doctors of Ayurveda to worship here before embarking on their ayurvedic practice career.

At Calicut too is a temple dedicated to the Lord. The credit of introducing neem and turmeric to mankind also is attributed to Dhanavantri. He is revered as the ancient guru of ayurveda.