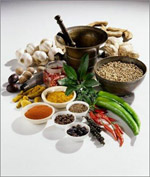 The word Ayurveda comes from the word ayur meaning life and the word veda meaning to know. Ayurveda means the science of life, and is a medical system practiced in India, Sri Lanka and Nepal. Ayurveda’s mythological origins, though, are attributed to the Indo-European Nasatya or Aswins, twin physicians of the gods of the ancient Indo-European pantheon. Four thousand-year old references to the Nasatya are found in the now extinct Hurrian and Hittite languages in Turkey and in the Sanskrit language in India. Ayurveda is considered the upaveda or accessory veda to the Atharva Veda. The four Vedas are the world’s oldest literary documents in an Indo-European language.

A classic Ayurvedic text that parallels the time frame of the Atharva Veda, is the Charaka Samhita. Written in the Indus Valley area around 1000 BCE in Sanskrit, it is a treatise on general medicine. This strongly suggests the probability that Ayurveda, though of pan-Indo-European origins earlier, had begun to evolve into a distinct entity within the sub-continent by the first millennium BCE.

Ayurveda’s lasting influence in the non-Indo-European sphere began after the rise and spread of Buddhism in the 6th century BCE Buddhist monks introduced Ayurveda to China, Tibet, Korea, Mongolia and Sri Lanka, leaving a lasting legacy in their medical systems.

More recently, the German translation of an Ayurvedic text that dates back to less than 1000 BCE, the Susruta Samhita, contributed to modern medicine the discipline of plastic surgery.